You are here: Home / Before and After / Cupboard Makeover – an Ikea Hack 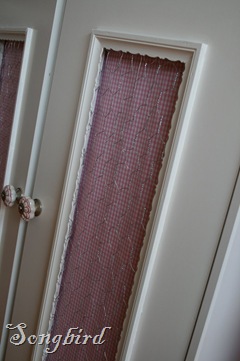 I have been stretching my DIY muscles and I have been working with power tools! And it was much more fun than I expected. So I did a little tutorial on what I did, come check it out. 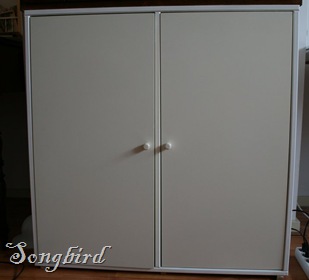 See! It is a useful, sturdy cupboard that happens to be exactly the right size to be the bottom to a library cupboard. But it was so ugly, and one of the first things you would see when you came into my craft room. It is solid mdf with this plasticky finish that used to be white, but had turned into this pale yellow.

I am not the kind of person to throw away a perfectly fine piece of furniture, but I didn’t want it looking like this.

And then inspiration hit me. It came in the form of this book. 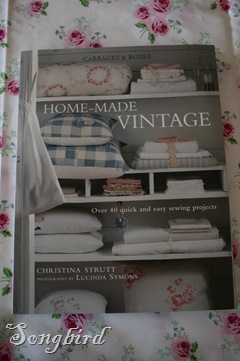 Home-made vintage by Christina Strutt. Christina has written several books on country, and vintage living, but this particular one contains mainly easy sewing projects. I was hooked the minute I say it at Bookdepository.com (do you know this online book shop? They have the same collection as Amazon but free shipping! I said free world wide shipping! Crazy addictive this bookstore I tell you). I mean come on, vintage, sewing and easy all in one book, how could I not buy it. And I was not disappointed.
Het idee voor dit project had ik gevonden in het boek Home-made Vintage van Christina Strutt. Een tijdje geleden had ik dit boek bij de Bookdepository gekocht. Dat is trouwens een geweldige boekwinkel met wereldwijde gratis verzending. Echt een aanrader!

You will see me do more projects from this book, but right now this is the picture that got me going. 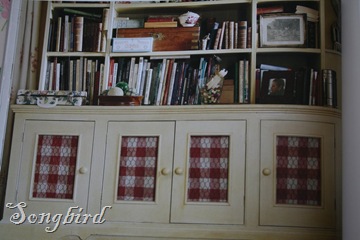 And so the project began. I’ll show you exactly what I have done, because it was actually quite easy and this kind of makeover lends itself to many cupboards. So I guess you might call this my first tutorial.

Because this cupboard had long doors I first had to figure out how big my windows in the doors should be. So I drew the doors in scale on paper and fiddled with the design until I thought it looked ok. If your cupboard has paneled doors this would be much easier, then you would just remove the panels. 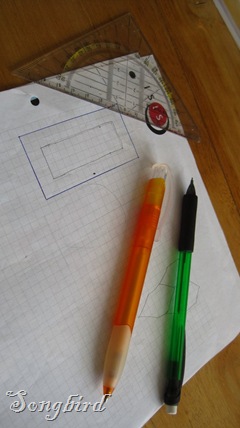 If you start sawing a window into something you have to be able to get the saw blade in there. So after I had drawn the lines on the door I drilled a whole in all four corners (power tool number one). Make sure the whole is big enough for your saw blade to fit through. Because the finish on my cupboard was very slippery I punched a small hole first so that my drill wouldn’t slip. 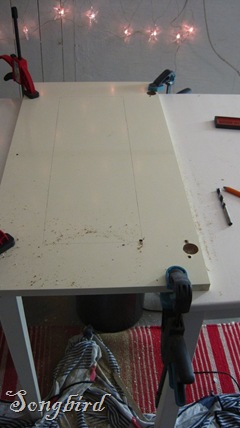 As you can see I constructed a sort of workmate table for myself . I set up two tables a little apart and then used clamps to make sure the door wouldn’t move. Don’t you think the Christmas lights add a nice touch?

And then came power tool number two, the saw. I was actually quite scared about that part, but it was much easier then I had feared. 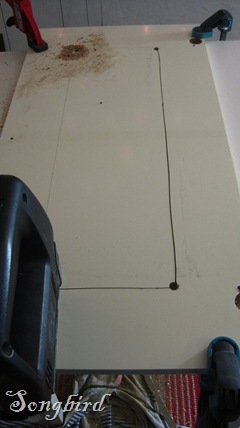 I sawed until the panel fell on the floor and it looked like this. 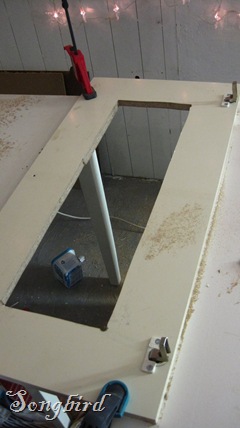 And then the fun part started. Fixing it up again.

I got myself some nice decorative moulding to finish that edge. Because the saw cut was pretty raw I searched for moulding that had a bit of a ‘hangover’ so that the saw cut would be hidden. 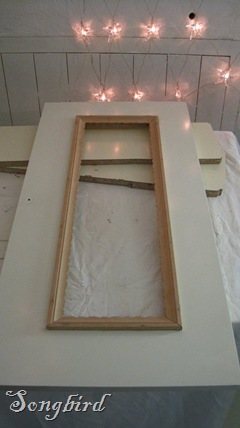 Figuring out how long the pieces of the window frame should be was actually the hardest part. It involved math! But with the help of my love I was able to figure it out. He also helped me saw the mitered corners. We attached the frame with some strong wood glue and a couple of small nails.

After that it was smooth sailing all the way.

Paint the whole thing. Because of the finish on the doors I used a ‘sticks to everything primer’ and I choose white as my color (of course).

Then I used a staple gun to attach chicken wire behind the frame. The finish on this doors was so hard that our staple gun couldn’t get any staples in, so I had to staple my chicken wire to the inside saw cut. But if your doors would be regular wooden ones, you could just staple it to the back. 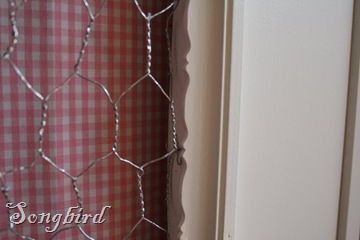 Here in this detail you can just make out how I (badly) stapled the wire to the sides. But you can also see how the overhang of the frame nicely covers it up.

Next get out the sewing machine (and yes ladies that is a power tool too!) and sew a panel that is big enough to cover the hole and the edge of the chicken wire. Easy peasy you only have to turn the edges in and stitch in a straight line.

I attached the panels with sticky Velcro. 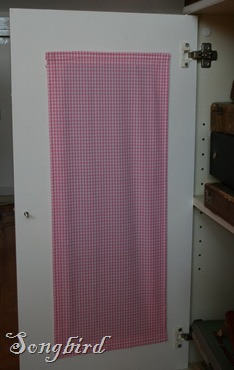 And finally get yourself some nice knobs. They really finish it of! 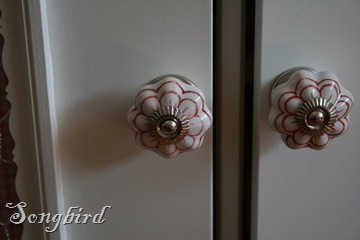 And then stand back and admire your work! 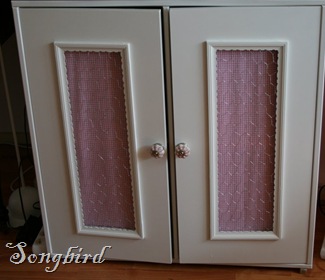 Now wasn’t that a fun and fairly easy project!? Believe me ladies if I can do it, so can you! 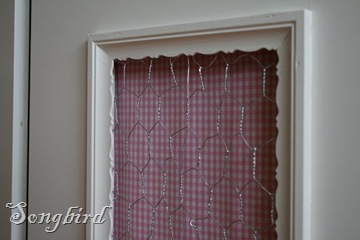 So did you like my first tutorial? Was it clear? Too long? Useful? Are you going to chicken wire your cupboards?
En wat vinden jullie? Geslaagd project? Geslaagde tutorial? Ik zou het fijn vinden als jullie me jullie mening laten weten, alle feedback is welkom!

Let me know what you think, I would love to get your feedback.