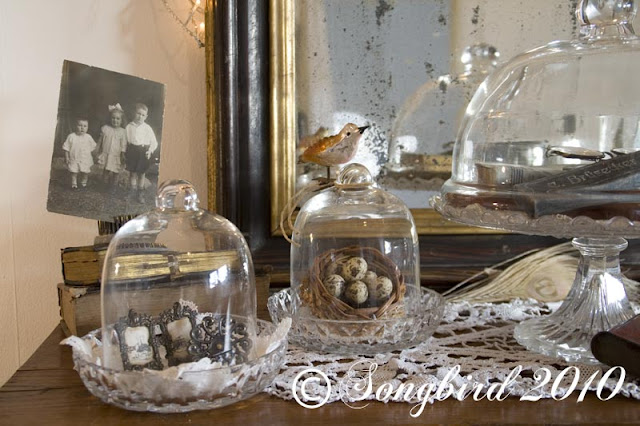 Good day ladies I hope the sun is shining on you today. In these parts of the world it is promising to be a nice Spring day. Although I must say that Spring is particularly cold around here this year. Can I say that we still have the heating on in the evening, and that I have only just put away my winter clothes….

Not because I didn’t need them anymore, but only because I couldn’t stand them anymore. I figured if I had to be cold anyway I might as well do it in cheerful colors.

Anyway, on to the topic of today’s post. Seeing that I recently shared some memories about my mother it only seemed fair I’d tell you guys a bit about my father too. Especially since he was the one who did most of the caring for my mom when she got sick. They were together for almost 50 years and after my mom died, life just lost its glow for my dad. The last years of his life he just spent waiting for the time he could join my mother again.

I have had this particular vignette in my craft room forever now, without showing it to you all here on my little ole blog, I thought I might as well snap some pictures of it and reminisce about my dad with you. And if you love to see more vignettes, you can join us at Marty’s place for Table Top Tuesday 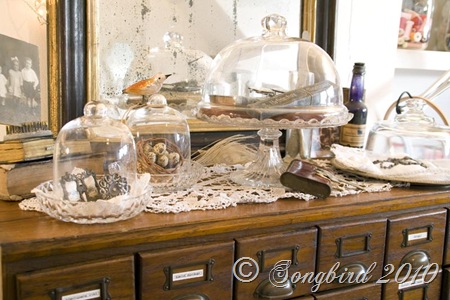 I gathered some cake stands and cheese domes and put various little objects underneath that not only look good but somehow remind me of my father too.

Most things didn’t really belong to my father, he was not into ‘having possessions’ really. As long as he could sit in his favorite spot on the sofa, knowing that my mother was close by, while he was reading one of his ‘whodunnits’ or solving a five star logics puzzle, he was happy. So of course there are a few old books doing what they do so well in a vignette: look pretty and give it an air of sophistication.

Btw, do you have a thing for old books too? Books that you will never read but buy anyway, because that dusty old smell of a well-read book just speaks to you? Do you? Oh, good, now I don’t feel so foolish anymore. 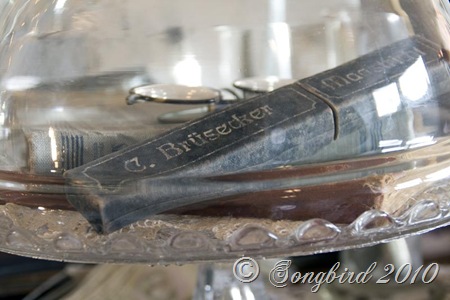 The next picture really shows a few dear sentimental things. Of course as you can see there is a picture of my father and his parents and siblings. My father is the boy standing next to his father on the left. Whenever my father saw this picture he would tell the story that he was ticked off when they took it. His youngest brother is sitting in front and apparently the year before they had a family picture taken too, and his younger brother had gotten the position on the chair in that one too. My father was promised that ‘next year you can sit on the chair’, but as you can see that promise was not held. Hence the sulky face. 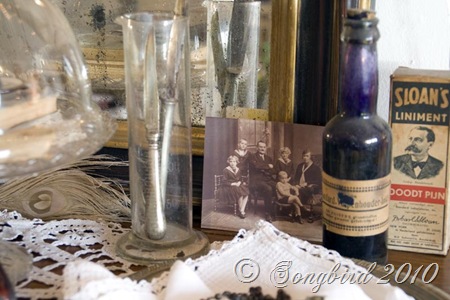 The glass measuring can (jug, canister, vase…?) is really old. So old that the glass that was hand-blown has these telltale little bubbles in it. My uncle gave this glass to me. He told me it was the same measuring can my grandmother used for measuring each child’s milk portion in the morning. I love knowing the story behind such an old, and in its day ordinary, little piece of kitchen necessity. 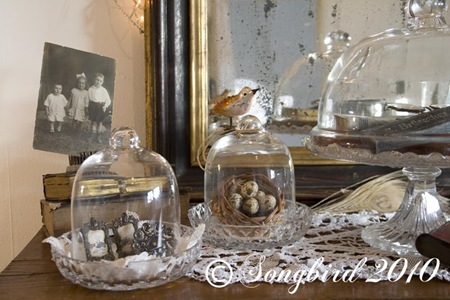 Of course there had to be a nest in the vignette, as a reminder of the warm nest I grew up in. That little birdie on top is the only Christmas ornament that survived from my family’s old decorations. It has lost it’s tail but some of that fake snow they used to spray Christmas trees is still on it. 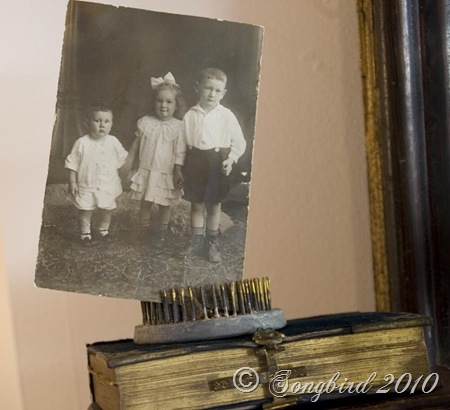 My father was the middle child, he is the smallest one in this picture. Wasn’t he a cutie…

My father was a quiet man of few words (I guess I take after my mother…..), always the observer and preferably not the center of attention. He lived for his family and was very proud of his children (although he would never tell that to us directly). He died six years ago. I miss him. 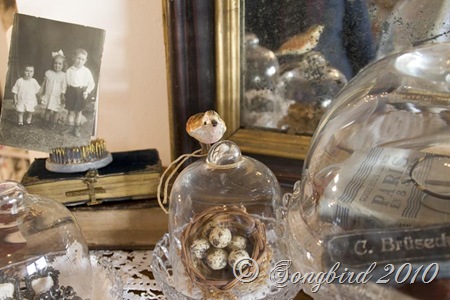